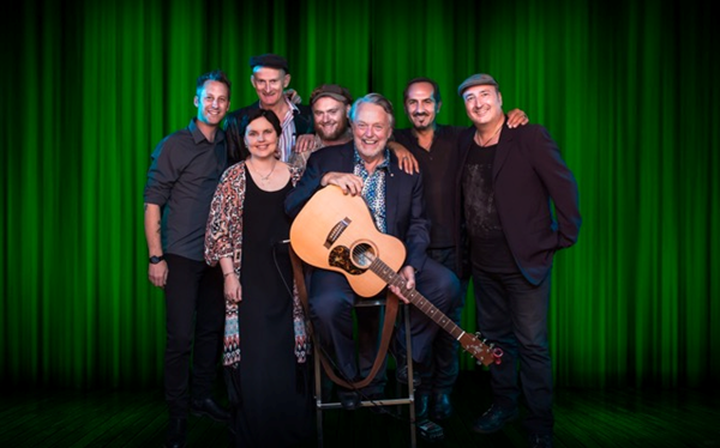 Mike Brady’s “BLOODLINES”, The Australian Irish Story, recorded over a 7 week period in Ireland, is a complete departure from anything you may have heard from this artist before.
Mike returns to his ancestry along the bloodlines of his father and his fathers’ father.

Mike presents songs interwoven with stories of fishermen, loggers, triumph and disaster. Of the human spirit, sadness, happiness and history. “To not know the story of your forebears is to not fully know yourself” says Mike. “To be able to bring these musical tales live to audiences is a sheer joy”.

To breathe life into these melodies Mike has pulled together the finest live players Melbourne has on offer.  Greenspot presents this critically acclaimed album live in keeping with the authenticity of the great players Mike worked with in Ireland. The likes of Steve Cooney, Martin Hayes, Christian Brady, Odhrán Ó Casaide, Robbie Perry, Dermot Byrne, Donnchadh Gough, Liam Ó Maonlaí, Laoise Kelly and Tony McManus.
​
​There is also a guest appearance by William Barton on didgeridoo.

MIKE BRADY
Voice/Guitar
Mike Brady was the firstborn of his Irish father and English mother. They immigrated to Australia when he was 11 years old. His music career started almost immediately when they moved to a migrant hostel and many of the children there sang and played guitar.  He was paid for his first gig when he was 13.
His recording career continued in the mid 60’s with the formation of MPD Ltd (Mike, Pete & Danny) who went on to become one of Australia’s most successful pop groups of the late 60’s with hits such as “Little Boy Sad” and many other charting songs in the 70’s and 80’s.
Up there Cazaly is just one of the hits written during that period and performed (originally as The Two Man Band). It went on to be the biggest selling local single of its time, with sales in excess of 250,000 and has become the unofficial Anthem of all Australian Rules Football Fans. His song “One Day In September” has also become part of the Football language.
Other sporting anthems written and performed by Mike are “Courage In Their Eyes”, which was used to launch Channel Seven’s media broadcast for the Olympic Games and “Rise To The Moment”, which was the Paralympic Official Team Song for the 2000 and 2004 Games.
Mike is also well known for his film, TV and advertising work and has written jingles for most of Australia’s famous brands. Over the years, he has been responsible for some of the most catchy advertising jingles including such as “Lucky, Your with AAMI”, “Hard Yakka” and “SPC Baked Beans and Spaghetti”,
Another aspect of Mike is his live performances and motivational speaking and Mike can be heard over the summer period as 3AW presenter of “Mike Til Midnight”.
Mike’s restless creative spirit has seen him record many critically acclaimed albums including “Country to Country, recorded in Nashville in 2006.  His latest release Bloodlines, the Australian Irish story, features extraordinary Irish-Australian songs harking back to his musical roots in Ireland (the land of his father) and his youth to his adulthood spent along Victoria’s Great Ocean Road which was the inspiration for the album.
In June 2013 Mike was appointed a Member of the Order of Australia (AM) for services to the community and to music as a composer and performer.

MICHAEL CRISTIANO
Guitar
Michael Cristiano is one of Australia’s most highly acclaimed performers and producers. As a producer, his name can be found on numerous multi-platinum selling albums by such artists as The Seekers, Judith Durham, Silverchair, Andre Rieu and Gene Pitney amongst many other big names.
As a performer, he is renowned for his on-stage presence, unique, soulful voice and virtuoso guitar skills that continue to wow audiences worldwide. He is one of the country’s most respected musicians and composers, has taken home many prestigious music awards and played live to an audience of millions at the AFL Grand Final with his (and co-writer Donna Fisk’s) composition ‘Rock The G’.
He continues to be one of the brightest and dynamic stars on the Australian music scene, dedicating his time and unique skills to both his own projects and those of emerging artists and established veterans alike.

PHIL COLLINGS
Drummer/Composer/Producer/Teacher
Phil performs in a variety of musical contexts ranging from the real-time composition and dissection of form and melody in The Borrowed Time Trio and ReAssemble, to the rock styling’s of Australian rock iconoclast Kim Salmon, and the linear and dexterous compositions of Australian composer Kate Neal. As such, he approaches every musical situation with a mind to create an individual timbre set and vocabulary unique to each scenario, involving combining various sets of cymbals, drums and percussion to provide the desired pallet.
Currently Phil is performing with the following Artists: The Borrowed Time Trio, The Ben Carr Trio, Mike Brady, Steve Sedergreen, Stu Thomas Paradox, Dan Flynn and the State of Things (Bass), Justin Brady, Mikelangelo, P2, ReAssemble, Kim Salmon &The Surrealists, andand the Phil Collings Trio.
Phil has led and written for his own projects, namely the Phil Collings Trio, which played the Apollo Bay Music Festival on the back of the 2003 CD release of “Music Room – Phil Collings trio”, and has a composition featured on the ABC Jazztrack 30th Anniversary Album.

JUSTIN BRADY
Harmonica, Fiddle, Mandolin
Justin Brady is a veteran of the Australian music industry, playing electrifying harmonica, fiddle and mandolin. He is available for sessional recordings, gigs and lessons and workshops.
Justin is well known to the Australian music industry as an electrifying harmonica, fiddle and mandolin player. His diversity and many years of experience with local and international artists has kept Justin busy for decades as a sessional musician for songwriters, bands, as well as for TV and movie soundtracks.
He is most well known as a multi-instrumentalist for one of Australia’s favourite bands, ‘Things of Stone and Wood’ and the winner of the Golden Harmonica award at the Tamworth Country Music Festival in 2006. Over the years Justin has toured Australia, Europe, the UK and Canada with ‘Things of Stone and Wood’ and performed in the US with blues legend ‘Guitar Shorty’.
Apart from recording several albums with ‘Things of Stone and Wood’, Justin has played on albums for John Farnham, The Black Sorrows, James Reyne, Shane Howard and James Blundell. He also toured with the critically acclaimed musical starring Deborah Conway and Julie McGregor, ‘Always Patsy Cline’
Recently, Justin has been performing in his own shows with Phil Collings. He also plays harmonica and mandolin in Mike Brady’s band Greenspot as well as conducting harmonica workshops at festivals and teaching private music lessons.

PAUL GADSBY
Bass
When Paul Kelly, Men at Work or Frankie J Holden and Wilbur Wilde want a bass player, they call Paul Gadsby. Pauls resume reads like a who's who of Australian pop. Starting in the seventies in the Carlton scene, Paul played with the seminal band, The Dots, led by a young Paul Kelly. His work can be found on hundreds of recordings including early work with the Sports singer, Stephen Cummings. He was a lynchpin in the travelling Elvis cabaret show known as the El Prezzos and has formed rhythm sections with the really great drummers including Daddy Cool's Gary Young. He is a song writer and showman all in the one package. He also has a very fine singing voice and an undeniable stage presence.